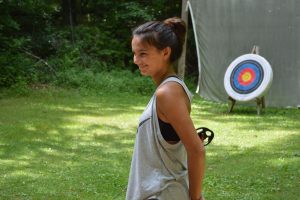 Success at camp is rampant! Campers are succeeding at rates seldom seen in other settings. What is causing all of this success? Here at WeHaKee, we think we know and we’re ready to share the secret to camper success!

First of all, it begins with the definition of success. At camps, like WeHaKee Camp for Girls, success is not determined on a curve, by ranking campers high to low or by engaging in competitions to identify the winners and losers, it’s not based on comparisons with others. Success is much more individualized in the camp world. Campers achieve success by simply doing things they have never done before or by getting better at those things in which they are familiar. Success is not an action to be tabulated and quantified at camp, rather it is an emotion where each camper experiences a feeling of satisfaction when she identifies that she has been successful. The key is the camper personally identifying the success.

Researchers have increasingly distinguished that movement and activity enhance a student’s ability to perform better academically. A recent Mind/Shift article highlights the benefits of body movement in helping children learn and succeed. In Why Kids Need to Move, Touch and Experience to Learn (KQED News Mind/Shift, March 26, 2015), the article’s author, Katrina Schwartz explores several research studies involving students at a variety of levels as they perform routine classroom problem solving with and without body movement included in the process. Consistently, using body movement to examine and resolve the problem enhances the potential for successful results.

When students use their bodies in the learning process, it can have a big effect, even if it seems silly or unconnected to the learning goal at hand.  “We understand language in a richer, fuller way if we can connect it to the actions we perform,” said Sian Beilock, professor of psychology at the University of Chicago. (Katrina Schwartz, Why Kids Need to Move, Touch and Experience to Learn)

So, the first two elements of the secret to camper success include the definition of said success as well as movement, touching, and experiencing. That is just what camp is all about. Every moment at camp is an experience – many which are first time experiences. Meeting new peers, peers just like them, and many very different is one of the first experiences at camp. Many campers meet some of their most cherished and lifelong friends at camp – friends that would have never stepped into and influenced their lives had they never went to camp. That alone could be considered complete success if that is all each camper experienced during their time at camp. But that is just the beginning! 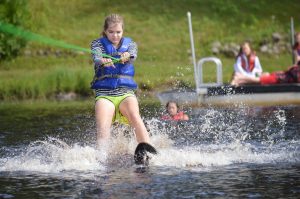 A final secret element of success at camp involves risk. Risk is often considered a bad thing when discussing children, particularly our own. But risk is exactly what children need to experience to achieve & grow successfully. Camp provides healthy risk-taking opportunities in countless ways. Social & emotional risk as campers meet new people and begin to create new friendships.  That is fraught with danger as each camper faces the risk of being pre-judged, rejected, or ridiculed. But the camp setting creates an environment that minimizes the negatives and enhances the positives of social risk. Then there is a physical risk as campers decide on their own which activities they want to try and even what path to take from one point in camp to another. There are no parents there to guide them and catch them when they fall. This can be daunting (usually more so for the parent than the child), but it also provides unlimited opportunities for success. Anytime a child is active there is the possibility of injury or harm. But in a camp setting with nurturing camp staff and supportive campers, those risks are minimized.

In a recent post,  Free Range Kids  blogger, Lenore Skenazy shared an article on how our kids are less likely to be hurt walking to school than not walking – Walking to School is Less Dangerous than NOT Walking (Lenore Skenazy, Free Range Kids, September 27, 2016). She posted an essay by Michael Lewyn, an associate professor at Touro Law Center, explores statistics that indicate children are at greater risk for injury in a vehicle than walking down a street. He also points out the reduction in physical activity by sitting in a car instead of actively walking puts kids at greater risk for obesity and other related health problems. Yet, in the supercharged media environment of child abductions, it would seem that driving them eliminates a very frightening risk, but Lewyn shares more stats to add reality to the minimal risk of this possibility.

We all want to reduce the risks our children face. But reducing them when they are already minimal can lead
to the kind of unintended consequences that actually make kids — and families — less safe. (Michael Lewyn)

The formula for success at camp is really not that much of a secret as it has been going on at Camp WeHaKee for nearly 95 summers. So, as we said, success is rampant and seemingly out of control at camp. Our secret: that every child should have a chance to go to camp and experience the joy of succeeding! Thanks for reading and have a great week everyone!