Do You Know Mary WeHaKee?

WeHaKee Camp for Girls’ namesake has a wonderfully meaningful legacy and a beautiful story.   Unlike many camps that may adopt a Native American name based on their location, their focus, and even in some cases a name that simply sounds similar (with no actual meaning) to a Native American language, the name WeHaKee is derived from an actual person with direct ties to the founding organization of the camp.

To better understand the context of our camp name, we invite you to revisit our story that is told around the Council Fire campfire each summer:

In the mid-1800s, a baby girl was born to a Sioux Indian mother and a French father near what is now Mankato, Minnesota.   Taking on the surname of her mother and father, the child’s name was Mary WeHaKe La Batte.

As was the custom of the day, Mary had little chance of being accepted by either the Sioux or French communities. This concerned the girl’s mother greatly.  So much so, that she chose to confide her child to Sinsinawa Dominican Sister, Alberta Duffy in Faribault, Minnesota.   To shelter Mary from the deadly violence between the white settlers and the Native Americans, Sr. Alberta brought the child to the Mound (the Sinsinawa Dominican motherhouse, if you will) in Sinsinawa, Wisconsin.

At the Mound, Mary quickly won the hearts and minds of the Dominican Sisters.   She received a thorough education at the Mound and developed a deep love of literature and music. Sadly, however, Mary’s life on this planet was to be too short. She died of tuberculosis at the tender young age of 14.   And as our campers know, she is buried in the Sinsinawa Dominican Cemetary, near her beloved teacher, Sr. Alberta Duffy.   Even now, Mary remains the only non-religious person to be buried in these sacred grounds.

Despite her short life, Mary left a profound impression on this congregation of Sisters in Southwest Wisconsin. When the camp was founded in 1923, the unanimous consensus was to name the camp after this lovely young girl who charmed the Sisters just a few decades earlier. 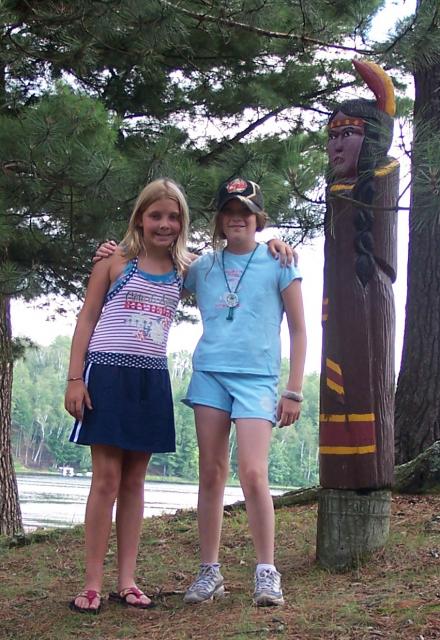 One of the most beloved traditions at WeHaKee is the legend of Mary WeHaKee.   It has been said that the spirit of Mary WeHaKee is among the campers each summer, ensuring their safety and encouraging them to grow in remarkable ways.   And when the full moon rises, her Spirit appears riding through the camp, eventually departing by canoe while singing a hauntingly beautiful melody as she slips across the water.

To commemorate Mary’s spirit and influence on the community of Camp WeHaKee, a lifesize carving has been displayed on the campgrounds for several decades.